This topic describes the basics of creating and managing a Promotions Manager discount promotion.

As described in Discount Promotion types, there are two fundamental types of Promotions Manager promotions:

The flow chart below describes the method you use to create the type of promotion you want to run: 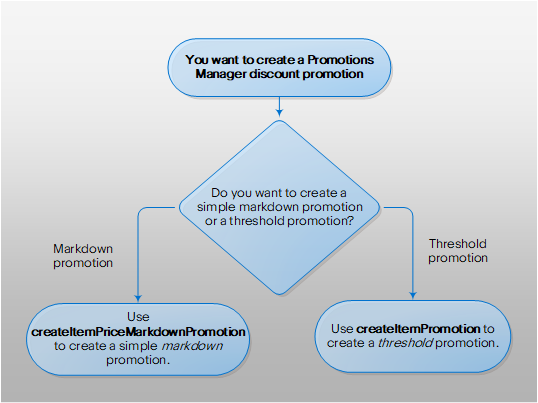 Note: When you create a promotion, the URI to the newly created promotion is returned in the Location response header. This value includes the promotion ID value, which is used in other Promotion Manager calls.

Customize your promotions by adding images, seller-specified labels, and a priority as they relate to other active promotions, and preview them before making them active by creating the promotion in a DRAFT state.

Customize your promotions by adding images, seller-specified labels, and a priority as they relate to other active promotions, and preview them before making them active by creating them in a DRAFT state.

Once you've created a promotion, manage and update it using the item promotion methods in the Marketing API. The following table lists all the calls specific to threshold promotions:

Specifying the items to include in a promotion

Whether you are configuring a markdown promotion or a threshold promotion, there are two ways to specify the listings to include in the promotion:

When the Promotions Manager includes a listing in a promotion, the service creates the "offer-type text" for the listing, which is an eBay-generated, non-editable tag line for the discount. The offer-type text is displayed with the listing in the eBay buyer flows.

Specify items to include in key-based promotions using either the listingIds or inventoryItems containers in your call to createItemPriceMarkdownPromotion or createItemPromotion:

Note: You can include a maximum of 500 IDs in any createItemPromotion or createItemPriceMarkdownPromotion request.

Specify items to include in rule-based promotions using the selectionRules containers in your call to createItemPriceMarkdownPromotion or createItemPromotion.

All the fields in the selectionRules container are optional, and you can configure up to 10 distinct selectionRules elements in a call, where each container identifies a set of criteria for the listings to include in the promotion.

In each selectionRules element, configure the following fields to identify the listings you want to promote:

Note: The selection rules you create can include a maximum of 10k listings in any createItemPriceMarkdownPromotion request. However, there is no limit to the number of listings you can include in a promotion created with createItemPromotion.

When creating a rule-based promotion, you can explicitly exclude up to 100 listings from the promotion. A promotion can have multiple rules, however exclusions are limited to a maximum of 100 parent items when entering inventory item IDs or listing IDs, or when choosing from live inventory.

You can specify IDs to exclude from a promotion using either:

There are several methods that support both markdown promotions and threshold promotions. These methods let you pause and restart promotions, get promotion reports, and get the set of items that are included in any one promotion:

All promotions configured with Promotions Manager are site-specific and you can add an item to a promotion only if the item is listed on the site where the promotion is running.

For example, after the seller has accepted the US terms and conditions, they can create a promotion for any of their inventory that's currently active on EBAY-US (ebay.com). The promotion shows up only on ebay.com, even if the items can be shipped to another country (such as Australia). To create a promotion for domestic Australian buyers on EBAY-AU (ebay.com.au), the seller needs to accept the Australian terms and conditions and create the promotion on ebay.com.au. They can then add items currently listed on ebay.com.au to that promotion.

When you set the promotion to SCHEDULED, the promotion will begin to run at the configured startDate, and the status will then be set to RUNNING. When the endDate of the promotion is reached, the state is set to ENDED.

The flow chart below details valid sequence of promotionStatus states:

The sequence of promotionStatus states